The gentle rhyme of Sarah Conway’s staggering poem ‘Never Give Up‘ allows the words to flow like a fairy tale. Within the piece though, lies a life story which reveals itself in uncompromising entirety; petals, thorns and all.

Recently her life story, her current situation and her indefatigable love-fuelled positivity were the focus of an Irish Times article which delved into the precarious nature of life for lone parents in Ireland today.

Grayce Leonard spoke to Sarah about how she has found inspiration and solace in poetry – even in the darkest of times.

Have you always used poetry as a form of expression?

Always, It’s always been the only thing that I have for me. I enjoyed doing counselling and talking to people but I am very independent as a person and I always wanted to feel like I could do this on my own without needing help but because things got so bad I had to accept the help.

For me, to be able to feel like I was still standing on my own two feet – I used poetry. Nobody helped me with my poems, it was my own thing. I would sit at night when the kids were in bed, light my candles, have a nice long bath, then I would be relaxed and I would take out my pen and paper and just start writing.  I always wrote through my relationship as well, I always left the book on top of the microwave and would say to my partner at the time that he can read it. We were lucky enough that it helped us when he was trying to get diagnosed because I would look back at the book and see the patterns.

Can you tell us about the New Futures programme and how this helped you with your recovery?

The New Futures programme was one of the biggest saviours for me, it was so amazing.  It’s based in Smithfield, they run amazing programmes and they also have a crèche on site, which means that you can bring your children with you while you’re doing the courses.

The way that I got linked in there was because I was looking for a job, I didn’t care what I worked at, for me it didn’t matter what I did once I knew I had an income for my kids. When I got there, there were between 20 and 30 single parents from all different backgrounds but somehow we were all similar. I joined that programme and it was amazing: it was all about finding out your values in life and your self worth and connecting with people in the classroom. We were all there for the same reason – we wanted to better ourselves and have a better life for our kids but we just didn’t have the information, but they have all the information in there. You can ask anything there, you have key working sessions, one to one meetings, they see how you’re doing and ask you what you want. That took me out of my whole world of feeling like I have no confidence anymore and feeling low and depressed. 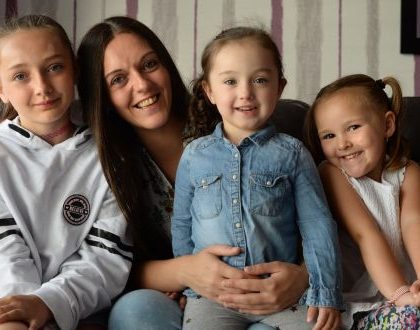 What are the small things that you do on a daily basis to ensure you are looking after yourself and staying positive?

I always think the best thing for me and my family is routine and structure. I’ve got my three girls and they are eleven, four and three and it can be quite hectic at times.  It’s very hard as a mother to divide your time between different kids but giving them that individual time helps, it makes the chaos in the house much less. I paid one euro for a packet of stars and it changed my life with the children’s behaviour.

Every child is going to be a child and test you but I made a rule chart and bought a packet of stars and I wrote 3-5 rules for the younger girls and 5-6 for the eldest. If they go by their rules each day they get a star just before they go to bed. They really bond off each other and they love getting their stars. Just telling them how proud you are when you give it to them, it changes so much, they sleep easier and they’re happy going to bed.

Do you plan to continue writing and releasing poetry?

I will always write and release, if anybody wants to listen to it. I remember always going back to the likes of a funeral; people would be in a very bad state and after a day or two of hearing the news of the death people would say things like ‘ah but wasn’t your Da funny’ and I noticed that people saying these things that it made them smile a little bit. So I thought about it and for one of my best friends I wrote a poem for her brother. It was the first time I had written a poem about someone who had passed.

When I told her I had written a poem she read it and told her mam, who then asked me to read it at the funeral. Our local church is on Aungier Street – Whitefriar Street church. The church was full on the day, which was my first time reading at a funeral. I remember standing out on the altar and looking out at all the people and everybody was crying and so upset but I just began to close my eyes and read the poem. I couldn’t believe the reaction after. That’s when I knew that I needed to do this, I needed to write.  It made me realize that my writing can actually help people.

Is there a particular song that you listen to when feeling down?

P-Stars – Dreams, these were guys that lived in the block of flats with me. A long time ago we tried to set up a be inspired group in the YMCA for people who may not have had enough for college and we could try get funding so that if they had a talent they would have somewhere to go, to try and help them progress.  The music video is based in the flats where I grew up and all around the area; the little kids that play in the flats are in the background waving.

When I first saw it I felt that is real that is their life. When I listen to the words of the song and understood that it was talking about your dreams and not giving up or backing down. It’s so amazing that I listen to it over and over again; it was my song through my four years of struggle.

Other Articles in News

Therapy Sessions are back! June 24th, The Worksman's Club, Dublin and June 25th, The Duncairn, Belfast

Are you interested in volunteering with the First Fortnight festival?

We are currently looking for volunteers for the upcoming First Fortnight festival which will be taking place from the 2nd to the 16th of January 2022!

Maria Fleming, CEO of First Fortnight and Maureen Kennelly, Director of the Arts Council in conversation at launch for Festival 2022.

The Grand Stretch
Covid-19-Related Programme Updates
First Fortnight Announces Appointment of New Chief Operating Officer
Cookies help us deliver our services. By using our services, you agree to our use of cookies. Learn more