RUTH Hunter is a comedian and contributor to the Headstuff site, where she Hunter-gathers (geddit?) fellow comics for friendly online chats. She hosts a regular stand-up night in the Workman’s Club (third Sundays of the month), co-hosted by Conor O’Toole, who joins Ruth on the bill for the Comedy Night for Repeal this Friday in aid of the Together for Yes campaign.

Ahead of Friday’s show, Ruth reveals all that’s good and funny on her radar.

Q. Tell us what we can expect from the upcoming Comedy Night for Repeal…

This is a night of some of the biggest talent in Irish comedy right now. I love all these comedians and they all bring a very different style. The cause of the night is a serious and urgent one but the actual event is just going to be a really enjoyable evening of very funny people who are there to make you laugh. Some of you may be worried about there being one man on the line-up but we checked and he is actually very funny and sound.

If you could magically change anything about the world you live in at the moment what would it be?

There are too many things and to name one would be to exclude another but in relation to the Comedy Night for Repeal in Hangar on the 13th, I reckon I’d just like Ireland to be a safer and more respectful place for women and other vulnerable groups to exist. Also, full communism. 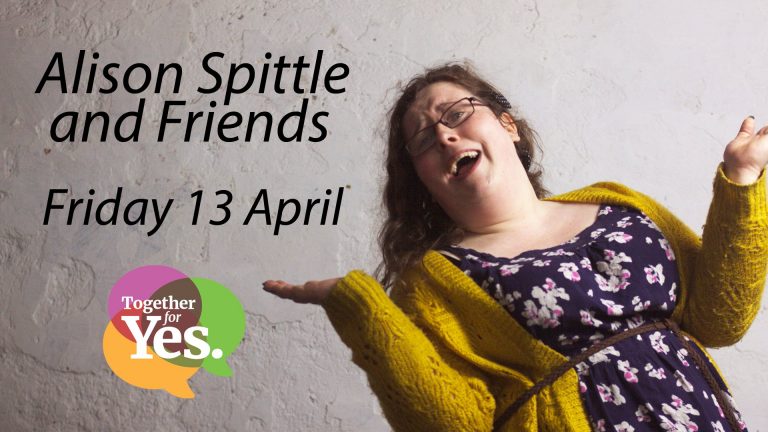 You have a web show called The Ruth Hurts in which you interview guests each week. On what basis do you choose your co-stars and is there a plan or do you go in blind and wing it? Obviously there’s an improv background there…

I’m not sure if the assumption that it’s improvised is a good thing or not but luckily, yes, it is. It’s just people I’ve worked with whom I admire. One day, I just thought to myself I’d love to get all those people I really like in a room and make them feel as uncomfortable as possible, but I hate throwing parties. Also, I don’t understand normal forms of prescribed socialising like ‘meeting for coffee’ or ‘having a chat’ so this is me making attempts at that and documenting it for further research.

I’m pretty confident in my curatorial abilities and I think all the people who have been on The Ruth Hurts are going to have their episode played back to them on Graham Norton one day as he asks them “I mean, no offence, but what the fuck is actually happening here?”

The show is still very much in its experimental phase but I hope we can keep making it for the next 100 years as evidence of human behaviour for touristic alien life forms, like how we now look at the cave paintings or Bebo.

When did you discover comedy was your life?

I tried to do normal life but I thought my skin was gonna melt off my skeleton, which like, is not a year-round look.

Who or what are you finding consistently funny at the moment?

So.Many.Funny.Irish comedians. Here is a big list: Aoife O’Connor, Grace Mulvey, James Moran, Matthew Tallon, Emily Longworth, Stephen Bradley, Kari Johnson, Fiona Frawley. Of course, to name any of them is to exclude others and I have no memory in general so I’m sure I’ve forgotten a bunch of other great people but this is just off the top of my head. They are all so unique and funny and they are the future so support them and fear them…I mean go to their gigs.

With regards to TV I just started watching Derry Girls the other day and, holy crap, I haven’t laughed that much in ages. Also Corporate is a very funny new American show with Aparna Nancherla who I’m a big fan of. There are also some men or something in it too but who cares she’s the funniest…I want to be her friend.

Any podcasts or web shows would you recommend?

I’m a big fan of Dil Wickremasinghe’s podcast. Her voice and perspective is an insightful and comforting port in a storm, it’s available on Headstuff. Comedian pals tend to be a bit of a feedback loop of compliments but Alison Spittle’s podcast is also excellent, she is a national treasure and infected with the spirits of the humour gods – it’s available, guess where??? Headstuff.

Conor O’Toole made an incredibly funny and lovely podcast called ‘The Captain‘ recently which is a short series and features a lot of great Irish talent. Stephen Bradley also has a lovely podcast called ‘Sleepytime.’ The idea is that you fall asleep as he talks to you but the concept is pretty flawed because he just keeps making you laugh which is not effectively soporific.

Any more forthcoming shows and projects you’d like to let us know about?

If you wanna see some of those awesome comedians from my list, mine (Ruth Hunter) and Conor O’Toole’s comedy club Workman’s Comedy Club is on the third Sunday of every month. This month’s is on the 15th April at 8pm upstairs in Workman’s and features Grace Mulvey, Kari Johnson and Stephen Bradley. It is a very nice comedy club and we try to make it as welcoming and non-toxic as is possible to feasibly achieve in a room full of strangers. We’re also hosting a tent of Workman’s Comedy Club at the Vodafone Comedy Festival with Aine Gallagher headlining. She’s great, google her.

I am hosting a comedy/drag/music night in Workman’s on the 20th June called KAPOWIE CABARET HEY-YAY. It will feature an amazing line-up of great comedians, drag queens and kings and some awesome music.

I am also previewing my own Edinburgh Show ‘Science Idiot’ in the wonderful A4 Sounds studio on 7th July.  Science Idiot is a person trying to figure out the nature of their identity using a mixture of science, psychology and good old-fashioned stereotypes. However, this person is deeply under-qualified to achieve this. It is quite unsatisfying but very weird.

Tickets for all events will be available soon.

Other Articles in Comedy

Marise Gaughan brings her show Drowning to the Fringe and its set to be one of the stand-outs of the festival. The topic alone stops you in your tracks. In 2014, Marise’s father killed himself. Her.

Hannah Mamalis is a prolific comic, writer and performer who is very active on the comedy and theatre scene, as well as a regular at the Edinburgh Festival. Some of you will have caught her acclaim.